2017 is drawing to a close, but there’s no rest for the wicked…and, well, we’re most definitely wicked. We’ve got a number of exciting projects for next year on the go, so stay tuned! But in the meantime; here’s an overview of what some of our brilliant 2017 Fringe stars are working on at the moment. 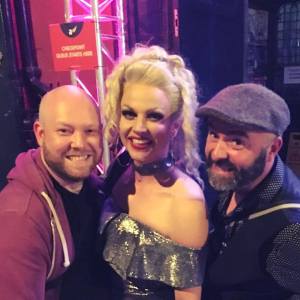 First up, Courtney Act. She made all the eyes pop and all the jaws drop, as she lost her Edinburgh Fringe virginity in the Underbelly’s Circus Hub this August with hilarious cabaret show ‘The Girls from Oz’. Man alive, that guuurl can sing!

Fresh off The AAA Girls tour, Courtney’s currently spreading festive cheer across the USA and Canada with her Christmas show, ‘Lump of Coal’.

This lady likes to keep busy, and ticket’s are already on sale for her brand new Fringe show ‘Under the Covers’, which she’ll be premiering on the Australian Fringe circuit early 2018, kicking off in Melbourne on the 3rd of February. You can get tickets here.

Next on our list of people making Civil Disobedience proud is the unstoppable Peter Michael Marino. His brilliantly improvised one-hander ‘Show Up’ did really well at the Edinburgh Fringe this year, raking in critical praise and audience members alike.

We love Pete for his talent, humour, and tenacity; you’d be hard pushed to find a funnier or harder working artist.

He’s currently performing Show Up in New York, with gigs coming up in Buffalo, Toronto, Long Lake, and Boston in December/January. You can find out more on his ‘Show Up’ website.

Another favourite of ours is Matt Gilbertson: the mastermind and multi-talented performer behind the hilarious and forever sequin-spangled, faux-German pop-sensation Hans.

Hans popped his UK cherry in 2017, taking London and Edinburgh by storm as he unleashed his own, unique and fabulous brand of political satire on unsuspecting Brits, with LOL-tastic show ‘Mein Camp’.

Like Courtney and Pete, Hans gets around and just now he’s busy preparing for a number of upcoming engagements, including several dates of his festive show ‘Christmas Cracker’, and taking ‘Hans: Mein Camp’ to Perth in January/February.

He’s also just announced his brand new show ‘If You Don’t Love Me…Leave!’, which will be premiering at the Adelaide Fringe in February/March. ‘Like’ Hans on Facebook to stay up-to-date on gigs and how to get your hands on tickets before they sell out.

From over-the-top camp pop shenanigans covered in sparkles, to the kind of soulful indie, folk and blues concoction that only our favourite Grammy-nominated singer/songwriter could compose, Michelle Shocked is next on our list.

We first met the ‘Godmother of Americana’ at the 2016 Fringe when we invited her to perform as guest musician in Joe’s NYC Bar, and we fell for her instantly.

We’ve since worked with Michelle on several runs of Joe’s NYC Bar, and in August this year we produced her experimental cabaret show, ‘Truth vs Reality,’ at the Edinburgh Fringe.

We’re currently programming her Mercury Rising Tour of the UK, which kicks off in February with three gigs at Brasserie Zédel’s legendary Crazy Coqs in London, as part of their Live at Zédel programme.

Last but by no means least, we want to give a shout out to gorgeous and hilarious New Yorker Mindy Raf, who blew us away at the Edinburgh Fringe this year with her intense, belly laugh-inducing tale of polyamory and pan-sexuality, ‘Keeping My Kidneys’.

Since returning home to the Big Apple, Mindy has renamed the show, which is now called ‘Not The One: a love story’.

A tantalising marriage between stand up comedy and storytelling, Mindy’s show emanates warmth, humour, and vulnerability, while tackling a borderline taboo subject matter that’s very close to her heart (and vagina).

You can catch ‘Not The One: a love story’ at The Tank in New York tonight, 6th December, at 7pm.

That’s it for now, but we’ll publish a second ‘Where are they now?’ update in the next few days, to give you the latest on another batch of the many superb artists we’re lucky enough to count as partners in creativity.