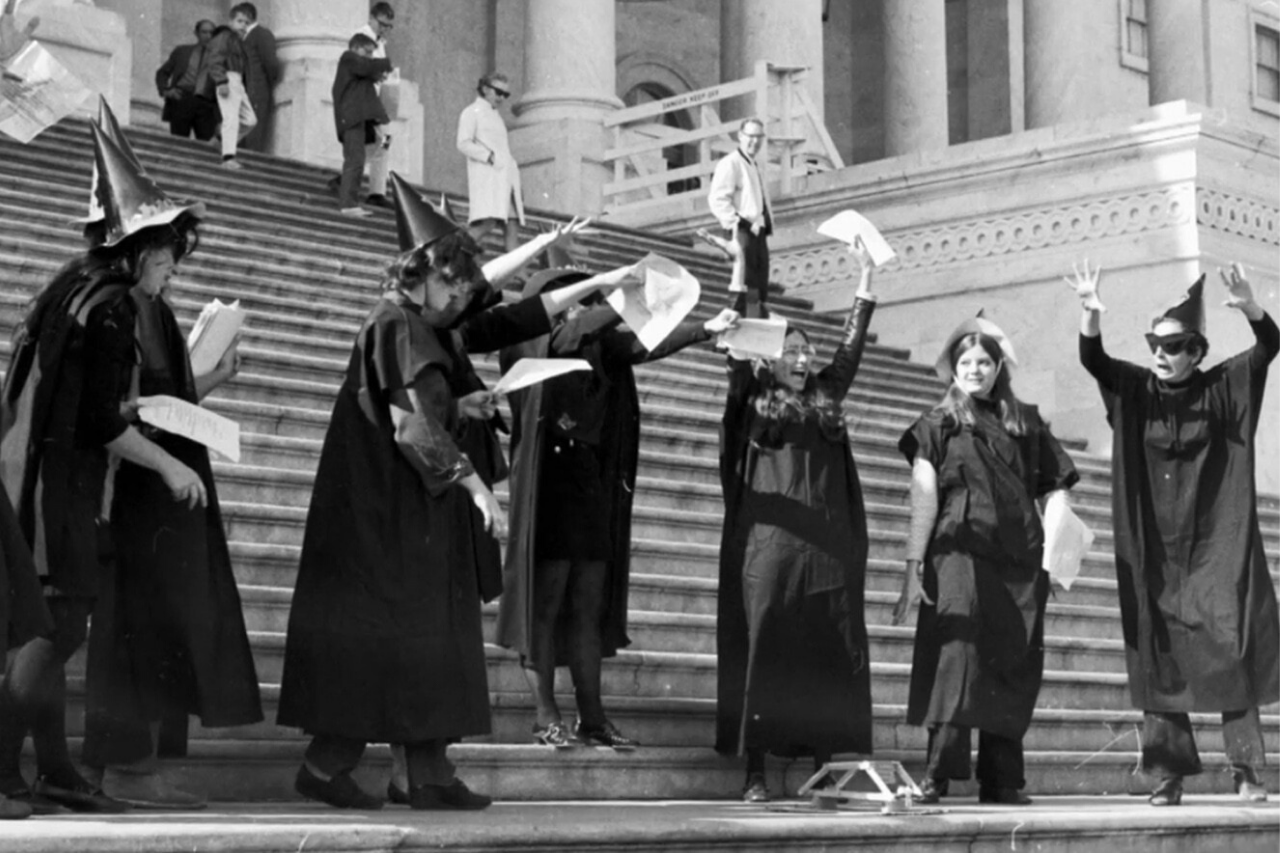 Double, Bubble, War and Rubble,
When you mess with women, you’ll be in trouble.

On Halloween 1968, Women’s International Terrorist Conspiracy from Hell (W.I.T.C.H.) was founded by a group of second wave feminists in New York. Dressed as witches, chanting “Wall Street, Wall Street, up against the Wall Street,” the group descended on the financial heartland of the US to administer a hexing. Behind their cloaks they were normal people fighting for what they believed was right.

In Scotland in 2019, a group of women gather on the evening of a political march to drink wine, share stories and figure out their place in the world. With the help of some witchy women who came before them, a new coven starts to awaken. They just don’t know how much power they have yet. Written by Louise Oliver and directed by Shilpa T-Hyland, W.I.T.C.H. is a high-energy experience that is part protest rally, part gig-theatre, part Witches Sabbath.

Inspired by feminist poet, journalist and original W.I.T.C.H. member Robin Morgan and her memoir Going Too Far, W.I.T.C.H. explores the Witch as a mythical and political figure. It delves into her shared history with matriarchs and healers, sexually liberated women, with revolutionary politics and her contemporary resurgence in popular culture, particularly within today’s political climate.

Following an ideas workshop at the National Theatre of Scotland, the project received some seed money from the RCS’ Make it Happen fund to support a two-day long residency on the Isle of Skye. This time was used to interrogate and respond to the original 1970s W.I.T.C.H. manifesto and connect with the Witch inside of us. Whilst on Skye, we made a creative pilgrimage to Dunscaith Castle, named after and home of the warrior maiden Scáthach of Celtic myth.

In October 2019 we completed a week-long residency at Lyth Arts Centre and W.I.T.C.H. received its first public work-in-progress sharing.

The sharing was great and we’d love to do more of these, you have inspired us! It was better than some finished shows we have. The music was charming but atmospheric when it needed to be. The writing style was warm, poetical and really powerful in places – particularly including the names of the Caithness folk who had been killed for accusations of witchcraft

W.I.T.C.H. is a Civil Disobedience project, led from our end by our Associate Producer, artist and resident Witch, Louise Oliver.

Louise is an actor, creative producer, and theatre maker. She has a Masters Degree from the University of Glasgow in Theatre Studies, and also trained as an actor at the New York Conservatory for Dramatic Arts. During her time in New York she worked with companies including The Wooster Group, Theatre Resources Unlimited, Gemini & Scorpio and The Tank Theatre, as well as co-founding her own theatre company, the Blockheads Collective.

Louise is the co-founder and producer of the Persistent and Nasty initiative and continues to make her own work as a theatre artist and with Civil Disobedience. Louise has created and produced work at the Edinburgh Fringe, with the Tron Theatre, The Arches and the Glasgay! Festival. Festival. Recently her practise has focused on issues concerning intersectional feminism and gender politics. Find out more at: mslouiseoliver.com / Twitter + IG @MsLouiseOliver

Shilpa graduated from the MA in Classical and Contemporary text at the Royal Conservatoire Scotland in 2017. She has a first-class degree in Theatre Studies and English Literature from Glasgow University and the University of California, Davis where she also spent time studying activism and performance. She is the inaugural winner of the Horsecross Trust Young Director Award, for which she directed a production of Miss Julie in February 2019. Her company Modest Predicament were listed as ones to watch for 2019 in the List’s ‘Hot 100’. Her practise is varied but she particularly wants to create work which questions our social and historical narratives.

Currently Shilpa is the Associate Director on the UK tour of Pride and Prejudice (Sort Of) with Blood of the Young. She is also the recipient of the JMK regional bursary, funded by the Leverhulme Trust Arts Scholarships Fund, which is supported her work as Assistant Director on Meghan Tyler’s Crocodile Fever at the Traverse Theatre (Edinburgh Festival Fringe 2019). Find her on Twitter: @ShilpaTHyland

Chris is a Glasgow-born musician and composer who has toured extensively, nationally and internationally, playing venues and festivals in the USA, Germany and Japan with his own band Gorman; with his collaborator, singer-songwriter James Mackenzie; and with synth pop band Vigo Thieves. He has written for theatre domestically and abroad, including “Macbeth” (Thanks For That Theatre), “Dog Sees God”, “Strange Fruit” and the premiere of James McLinden’s “Pooka” at the Tank Theatre in New York (all Blockheads Theatre Collective).

He recently worked with the National Theatre of Scotland scoring their augmented reality app, “The Reason I Jump”, a digital treasure hunt featuring stories and thoughts from autistic school students about their experiences, and with renowned theatre maker Ellie Dubois on Zinnia Oberski’s “Dreams of the Small Gods”, composing an original score for a haunting performance art piece on the static trapeze. Find out more at: chrisgormansound.com / IG @chrisgormansound

Special thanks to the following performers and collaborators who are currently part of the W.I.T.C.H. coven:

Huge thanks also to The Royal Conservatoire of Scotland’s Make it Happen Fund and the Lyth Arts Centre for their support so far.

W.I.T.C.H. will receive further development and sharings throughout 2020. Watch this space for updates.