So much awesomeness, so little time!

Following on from Part 1, this sequel update looks at some more of the amazing artists that we’ve recently worked with, and what they’re currently up to.

Let’s start with international cabaret sex god, Tomás Ford. He’s 50% crazy, 50% genius, and 100% hilarious. That makes 200%, which pretty much sums up the energy levels at his shows.

He’s not for the fainthearted, but the critics love him and so do the punters who’re prepared to leave their inhibitions at the door and get down with ADHD for the night.

Tomás is currently back home in Australia, preparing to host ‘Tomás Ford’s Fxxk Yxu’ at Fringe World 2018 in Perth, this coming January/February. It’s a pop-up venue with a tightly curated fistful of only-at-the-fringe thrill rides from around the world, and tickets are on sale now. 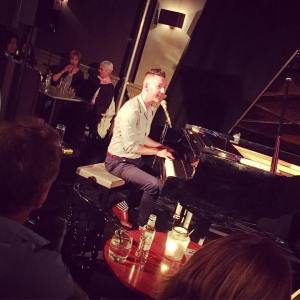 From rough and ready, to effortlessly smooth, we’re moving on to the wickedly handsome and outrageously talented Michael Griffiths.

We first saw him doing ‘In Vogue: Songs by Madonna’ at The Boards, Edinburgh Playhouse some years ago, and it’s more than fair to say that this veteran musical star and pianist sang our knickers off. Or he would’ve, if we hadn’t already taken them off and flung them at his Steinway grand.

Solo shows ‘Sweet Dreams: Songs by Annie Lennox’, then ‘Cole’, featuring songs by Cole Porter, followed – and as if we weren’t moist enough already, Mickey’s about to take his brand new show ‘Lucky: Songs by Kylie’ on tour over in Australia! (We’ve officially slipped off our chairs.)

He’ll be kicking off in Melbourne on 17th January, and tickets are currently available from fortyfivedownstrairs.com.

We also want to give our favourite cabaret glam goths, Carla Lippis, Geoff Crowther, and Vicky Falconer, a shout out. Their deliciously spellbinding Edinburgh Fringe show ‘Cast A Dark Shadow’ garnered rave reviews this August, and we’re super-excited to see what this beautiful bunch come up with next as a group.

If you’re planning a visit the Adelaide Fringe in February/March, you can catch Carla presenting Midnight Marauders there. She’ll also be doing a one-off show – simply called Carla Lippis – on 6th March, and she’s bringing back her awesome 2016 show, Baby Carla’s Bad Girl Rumble for a few nights.

Vicky will be at the Adelaide Fringe too, with her kick-ass power-lady posse the Fringe Wives Club, doing a full run of their show Glittery Clittery: a conSENSUAL Party. And because she’s a glutton for punishment, Vicky will also be performing a half run of her debut solo show ‘Oxymoron‘ while there. Ooft!

Needless to say, we’ve got some serious Aussie envy going on with all that talent about to hit stages all over the place down under. If you’re lucky enough to be heading there during the Fringe/festival season, do yourself a favour and go see some of these amazing shows!