Before Ella, Tina, Billie and Beyoncé, there was Josephine: the first African-American international superstar!

About Josephine, the show… 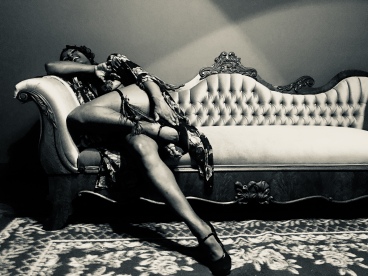 Josephine is a biographical musical that combines cabaret, theatre and dance to tell the story of the iconic Josephine Baker, the first African-American international superstar and one of the most remarkable figures of the 20th Century.

During that time, Josephine has sold out shows in over 20 cities and accumulated dozens of 5-star reviews and awards, including six ‘Best of the Fest‘ wins and six ‘Outstanding Performance‘ recognitions. It was selected as the ‘Outstanding Production‘ of the 2017 Soho Playhouse Fringe Encore series, and awarded a limited off-Broadway run in 2018, where one reviewer called it “a perfect piece of theatre for the time we are currently in.”

About Josephine, the icon…

Josephine Baker was born in St. Louis in 1906 and achieved only moderate success in the United States, but became an international superstar after moving to Europe in 1924.

She starred alongside white romantic leading men in films in the 30s, had multiple interracial marriages and homosexual relationships, and performed in men’s clothing before the term “drag” existed. She was a spy for the French Resistance in WWII, a civil rights activist, and mother to 12 adopted children. Her success often gave her the opportunity to live free from the racial oppression of her home nation, though she never stopped yearning for acceptance in America.

Josephine at the Edinburgh Fringe

Josephine was an instant smash hit at Gilded Balloon in 2019, notching up multiple sell-out performances and five star reviews during its half run. Tymisha, Mike and the team will be back in 2020, staging an even bigger, better version of Josephine for a full Fringe run, which we’re delighted to be supporting. More details to follow in due course.

“She should be starring in a movie version directed by Baz Luhrmann.”

“I believe the time is long overdue for strong women of colour to have their voices heard and their stories told. Playing Josephine Baker for the last three years has made me a better performer and human. To be able to share this story that touches hearts and minds across the world has been the most fulfilling artistic endeavour of my life.”

“In a time of nationalism, tribalism and xenophobia rising worldwide, I am very excited to bring the story of a woman who broke boundaries of race, gender, and sexual orientation to international audiences at Edinburgh Fringe. The show is also wildly entertaining with great music and dancing, which serves to make Josephine’s messages of love, acceptance and humanity even more resonant.”