If you’ve had the audio-visually orgasmic pleasure of catching a Carla Lippis gig in the past, then you know audiences are in for an epic treat when she premieres her new show, Cast A Dark Shadow, in London later this month.

In the lead-up to her full run at the Edinburgh Festival Fringe in August, Carla and her band are performing two exclusive previews of Cast A Dark Shadow at Crazy Coq’s Live @ Zédel in Soho, and we can’t wait to wrap our ears around her silky smooth and scary powerful retro-electric sound!

Get your tickets HERE, right now.

About Cast a Dark Shadow… 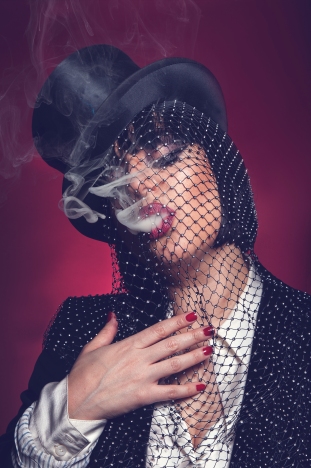 Lou Reed and Nancy Sinatra hand-in-hand on a desert death trip; Suicide and The Ventures jamming long into the night in a rickety old house; the angelic tones of Connie Francis drifting through the fevered dreams of David Lynch.

With Geoff Crowther and EastEnd Cabaret’s Vicky Falconer providing an esoteric accompaniment, including guitar, keyboards, theremin, and vintage drum machines, expect cabaret at its most unorthodox.

If you want to see Carla in Edinburgh at this year’s Fringe Festival, she’ll be at The Boards, Edinburgh Playhouse, 2-26 August 2017 at various times, and tickets are on sale now.

Carla’s got a voice like liquid fire, gun smoke and the kind of sex that David Lynch characters called Audrey Horne have.