We heart you, Orlando Fringe

Yep, as you may have noticed if you made it to the end of yesterday’s blog post on how to avoid Fringe burnout, we are in Orlando this week (and part of next).

We’re having a great time lounging by pools and catching up with friends, our only complaint so far being that we don’t appear to be losing any weight, despite sweating like two pregnant nuns for most of our waking hours. 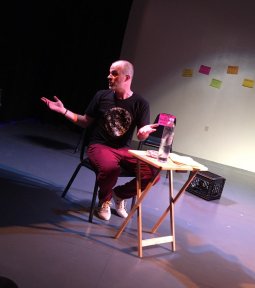 Yesterday we finally got the chance to see (and participate in) Peter Michael Marino’s excellent solo show, Show Up, which we’re co-producing in Edinburgh this August. We just adore Pete and always enjoy his work. It’s safe to say that his most recent offering didn’t disappoint.

Show Up is an effortlessly hilarious masterclass in improvisation and audience engagement. But not the scary kind of interactive theatre, where you’re pulled up on stage and used as the punchline in a humiliating joke. Pete’s ever so gentle, as he uses the audience’s input and a whole lot of Post-It notes to weave a seriously amusing story that varies entirely from show to show.

The overriding theme centres around social anxiety, and the suggestion that it’s almost always easier to actually just show up to something, rather than lying at home watching TV shows about aliens, putting said thing off, and endlessly stressing about it.

If you like to laugh and you’ve not seen Show Up yet, do yourself a favour and get your tickets booked now, before the run sells out.

With our participants passes secured (one of us was particularly excited to don his first ever Fringe lanyards as a full-time member of the international arts industry community yesterday – see photographic evidence) we’re looking forward to catching lots of exciting work over the next few days.

Of course, we can’t wait to see another one of our Edinburgh shows, Joe’s NYC Bar, on its home turf this evening. If you’ve not been before, you’re due a visit to this glorious dive bar. And if you have been, you know you need to join the regulars for more of the good stuff.

The same goes for Modern Robot’s Alive: Music for Night of the Living Dead, which we’ll be attending at midnight tonight. A zombie cult classic, edited down to an intense 60 minutes and accompanied by a live performance film score…kicking off at the WITCHING HOUR! What’s not to love?! We’re incredibly excited to be helping Modern Robot’s Ben Singer bring this show to the Edinburgh Fringe later this year as well.

“Our shows” aside, we’ve got a busy schedule of work to see and meetings to be had, and we’ll aim to post another update later this week, or at the start of next, shouting about our hot tips and favourite performances.

Speaking of which, our good friend Neil Arthur James is here introducing his deliciously ghoulish, storytelling alter ego Dandy Darkly to the Orlando Fringe for the very first time, with the show Myth Mouth. Dandy’s already caused quite a stir and we’re predicting a sell out run, so get your tickets while you still can, ladies and gents.

We’re also on the look-out for new, interesting projects we can help deliver in 2017/18 and beyond. So, if you want meet and tell us about your work, plus find out a bit more about what we do and how we might be able to help you (perhaps you’re thinking about bringing your show to the Edinburgh Fringe, or taking it on tour?), we’d love to hear from you.

Even if it’s just a quick drink and an informal chat…we’re always up for making new friends, so give us a shout.

We leave Orlando on Wednesday the 24th of May, so ping us anytime before then to arrange a catch up.

Hope to see you around!